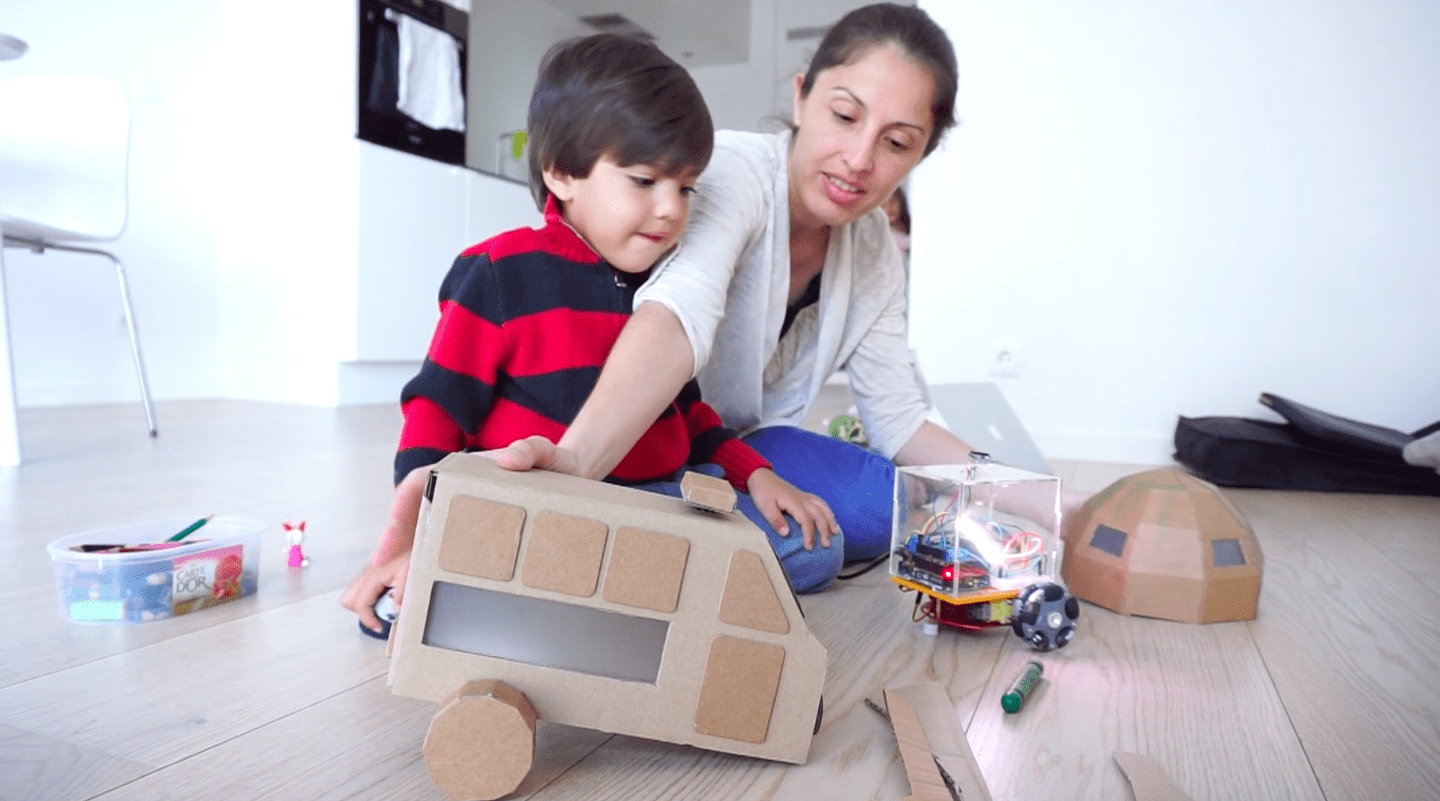 Cardorama is a result of the Sustainable Tangible Design taught at CIID. The project was made with two other teammates Shailee Advani, and Suniti Thapa. My individual role in the team was software and electronics prototyping, and video editing. We also did storytelling, filmmaking and brainstorming together as a group.

There was a focus on creating a product with a net positive environmental impact. This means, that over a longer period of time, the product should contribute positively towards sustainability.

Cardorama is a toy service concept that aims to create toys that reduce waste produced by the toy industry by using materials that can be easily recycled and reusing components that are difficult to recycle.
‍
Cardorama proposes a modular toy system with a ‘smart electronic core’ that brings shells made of cardboard to life. Even the cardboard box this toy is shipped in can be used for the first creation. The electronic core in this product will continue to live on for several cycles and could eventually go back to the company where it’s refurbished and distributed to another child.

The problem with toys today

Having a child means being the witness of many firsts. From the first favourite soft toy to the first jigsaw puzzle, each milestone signifies growth and is a source of great joy to doting parents. But what happens to these toys once your child has outgrown them?

From desk research and interviewing 3 parents, we wanted to understand the global problem and how it manifests at a local scale. We found that:

Globally, 80% of toys manufactured end up in landfills. The fact that children quickly outgrow their toys due to quick cognitive growth only compounds this problem. 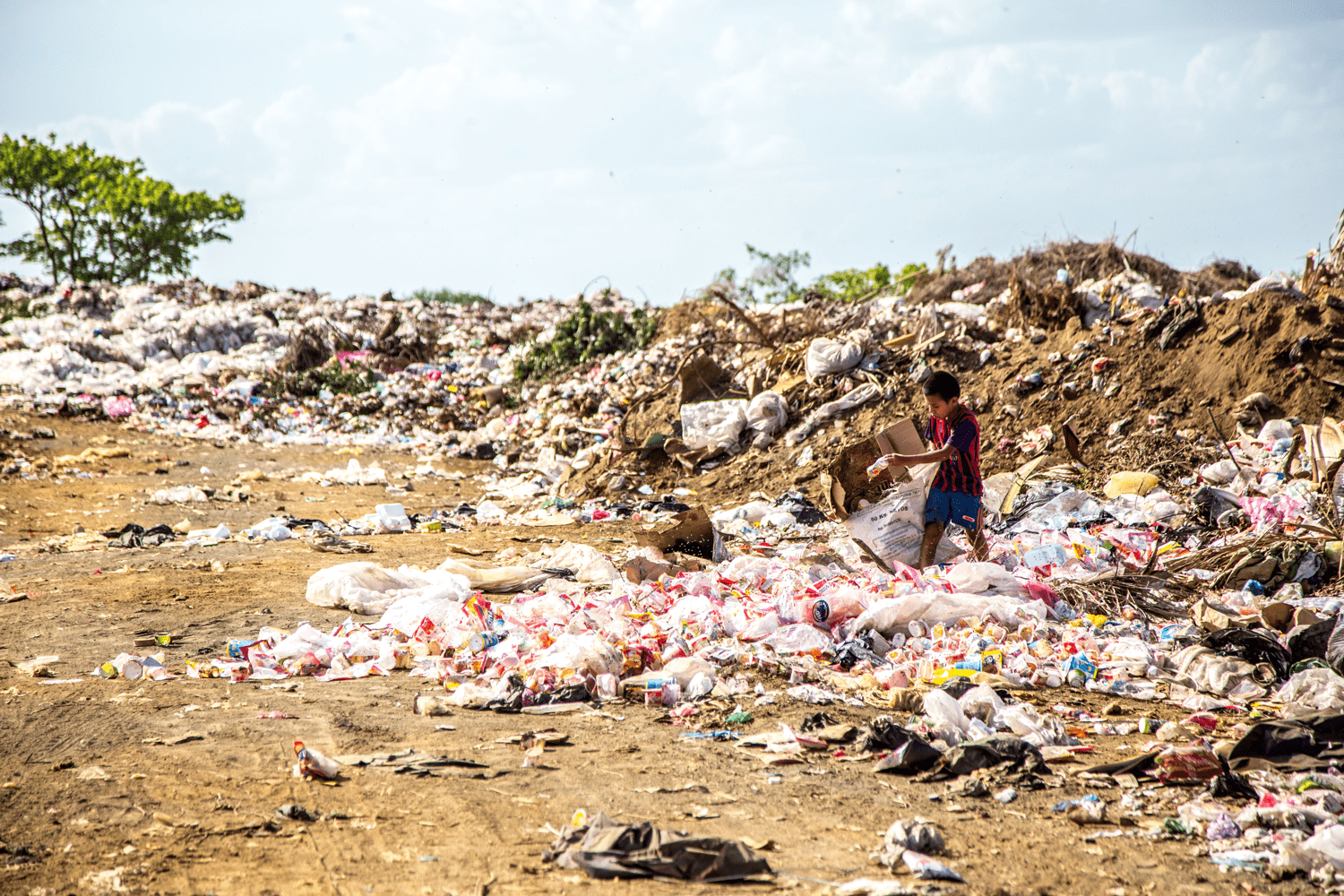 Most toys can't be recycled and end up in landfills

Due to quick cognitive growth in children, it leads to new toys being bought at a quick rate, and the old toys being thrown out.

The fact that most of these toys are made from a combination of plastic, fabric and electronic components, it makes them impossible to recycle.

These alarming statistics inspired our team to question whether it is possible to have a single toy that adapts to changing cognitive needs of children, thereby reducing global toy landfill waste.

Cardorama makes interactive toys with an electronic core and a cardboard outer shell. The electronic core remains the same, and the outer cardboard shell can be easily replaced, recycled, or re-made to place over the core.

The core recognises what is placed on top of it, and reprograms itself to behave that way. For example, if a car shaped cardboard was placed on top of the core, the toy would behave like a car. If turtle-shaped cardboard was placed instead, the toy would behave like a turtle. This way, it is always adaptable to the changing interestes of the child.

A modular toy set with a smart core that can be adapted by kids and parents minimizes the waste of buying and discarding toys.

How does it work? 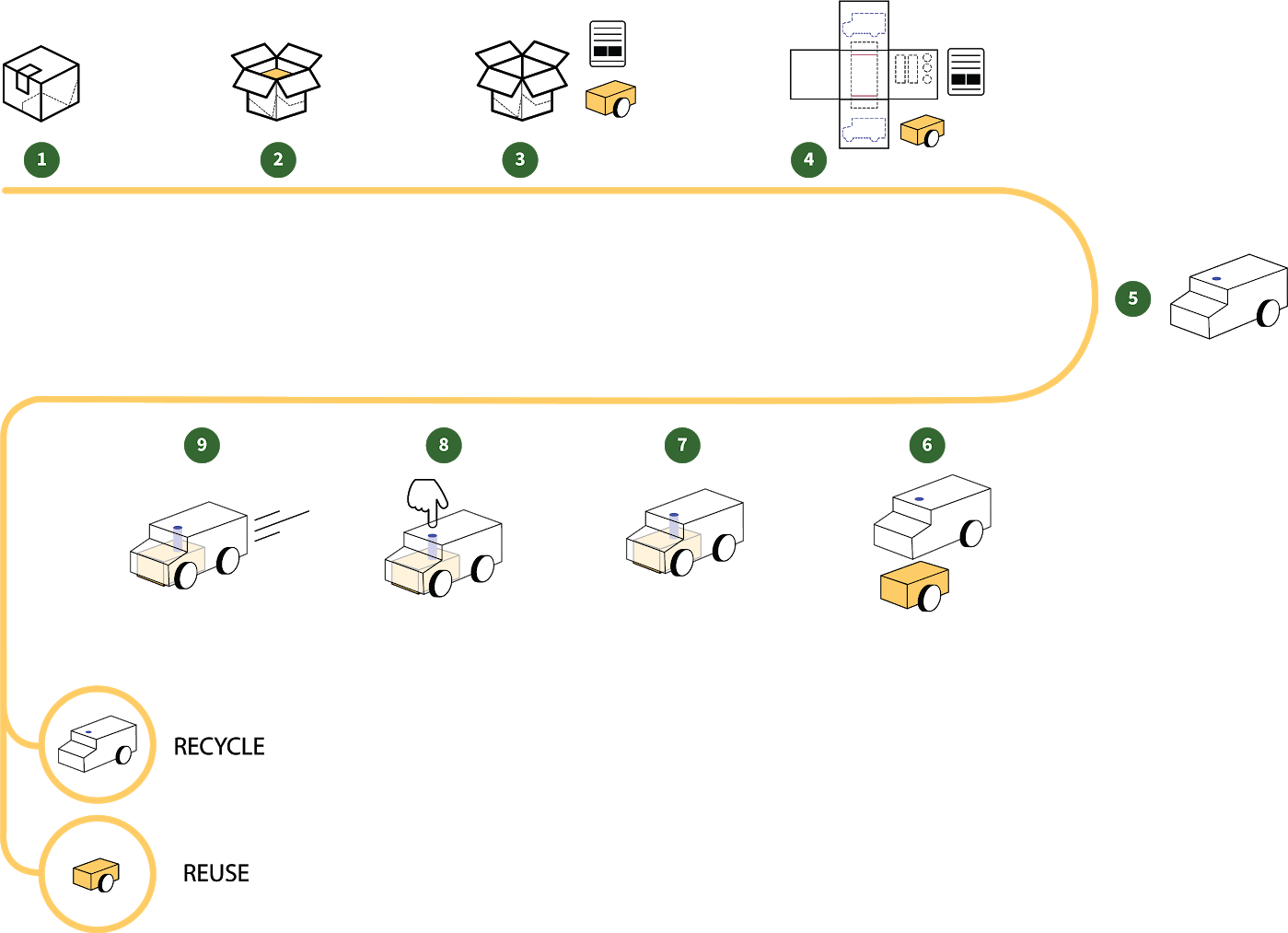 A map of the toy's journey after the user receives it

Once the child loses interest in the toy, another cardboard toy can be made with any kind of cardboard by looking up cutting instructions online.

The cardboard is detected by a color sensor on the electronics module, which reprograms itself to behave in a particular way. We imagine kids playing around with coloring the inside of the cardboard and placing it on the module to see how the behaviour changes.

We also learned from our interviews that co-creation is a good way to build connections with kids. We imagine the toy to be used by kids of all ages, starting out with co-creation, and building it themselves as they grow older.

The process was a fairly linear double diamond, with iterations in each step of the process
1: Research & Synthesis

We wanted to chart out the problem at a global scale, and then understand how it manifests itself at a smaller, local level.

For doing that, we conducted desk research to understand larger level problems, and then ideated about different ways it can manifest itself on a local level. The ideas of toy wastage stood out to us as all members from the team could remember throwing away a lot of cheap plastic electronic toys.

We talked to parents to understand if their kids lose interest in toys quickly, leading to them throwing and buying a lot of cheap toys. This helped us understand the problem on a local level. 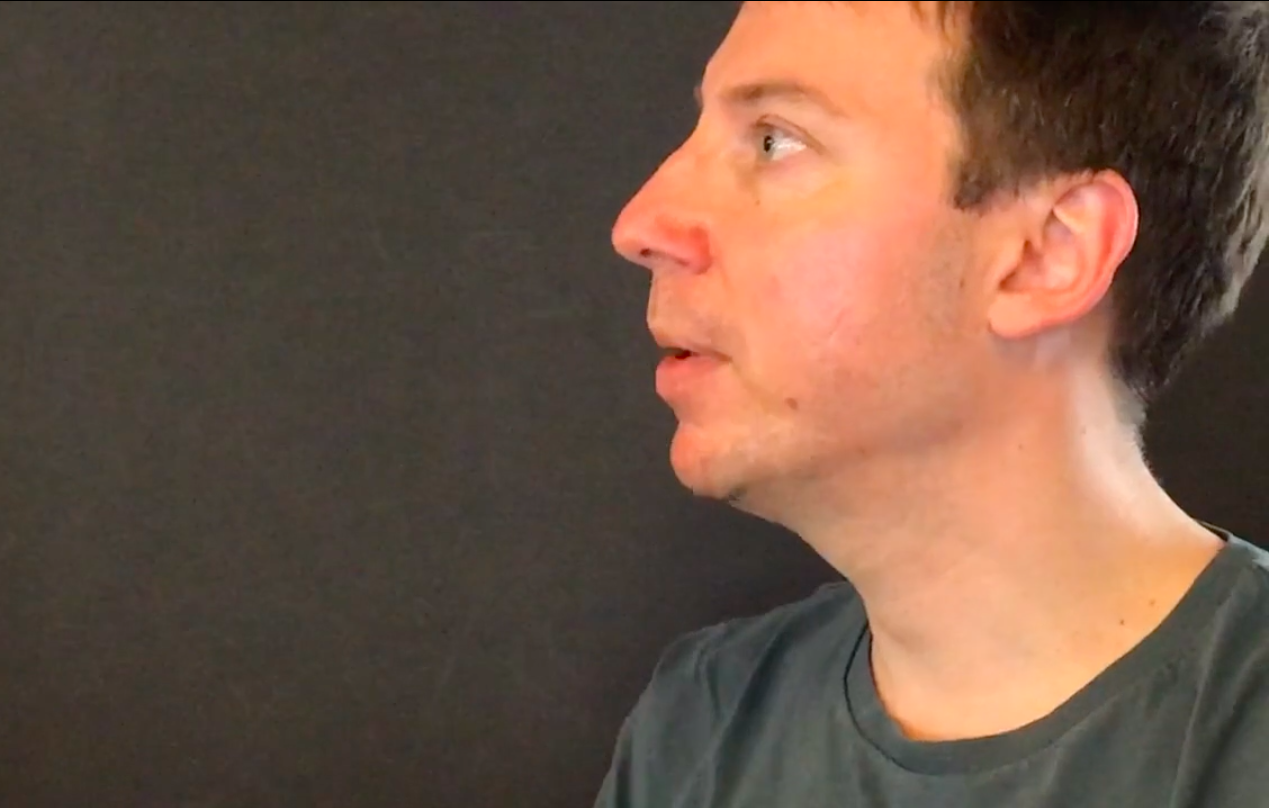 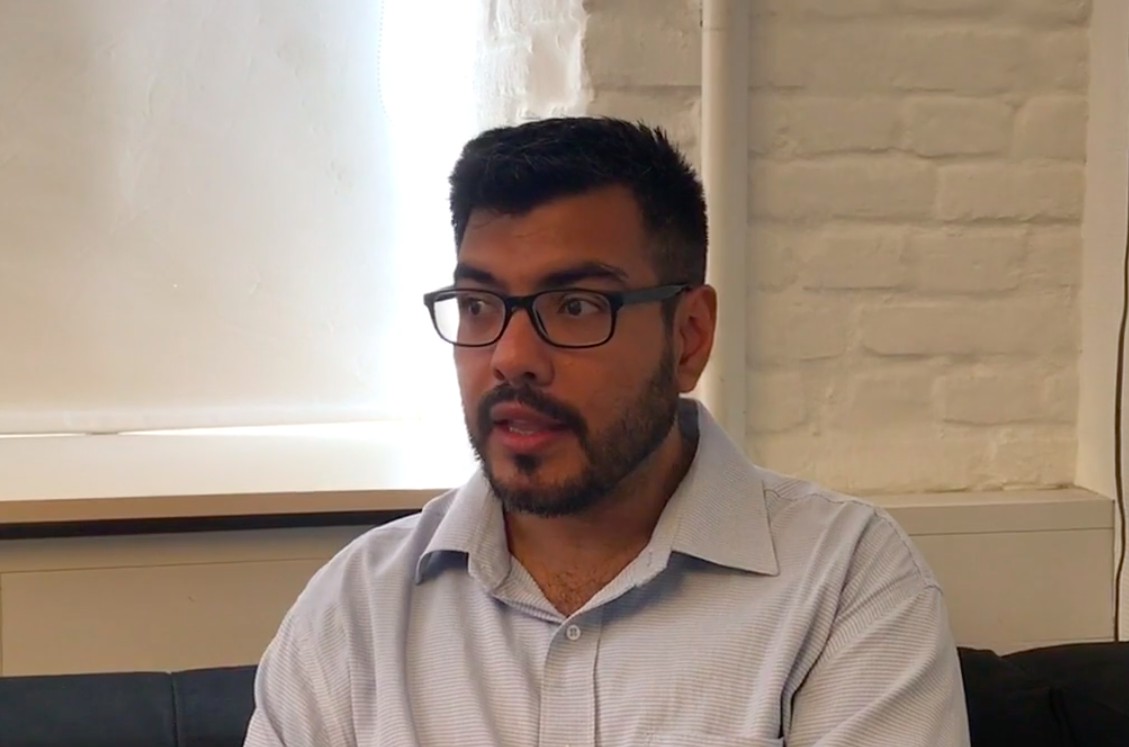 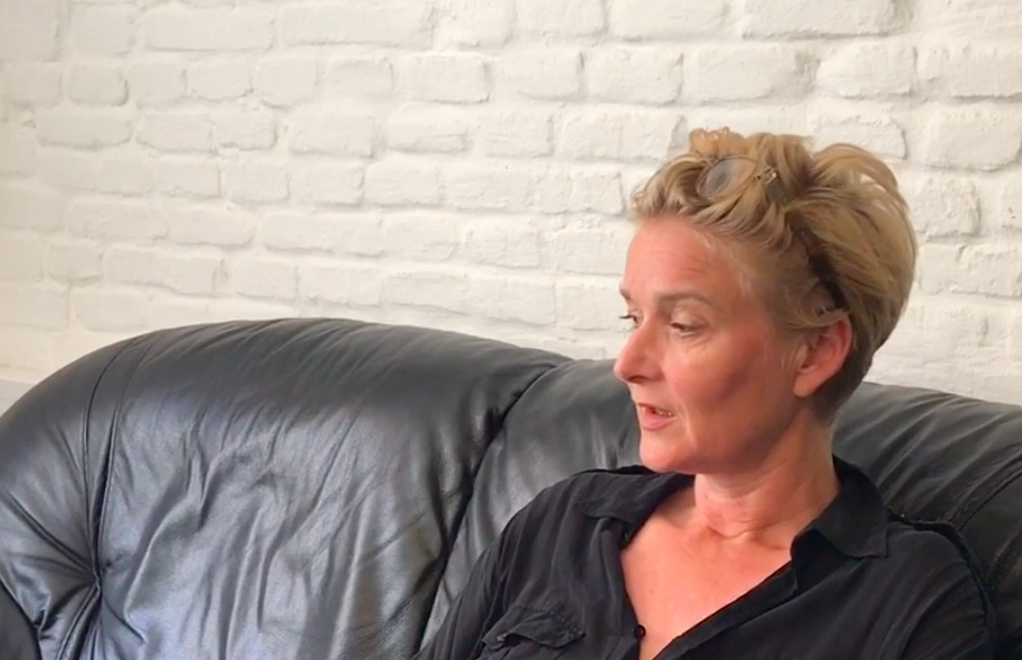 The major findings from our interviews were:

We created a set of principles, and then brainstormed on different ideas that could solve the problem while also implementing the principles, and landed on a modular toy system that went on to become Cardorama.

These principles guided our product decisions

After we had solidified the idea, we then began to think about user journeys of how the interactions would work. 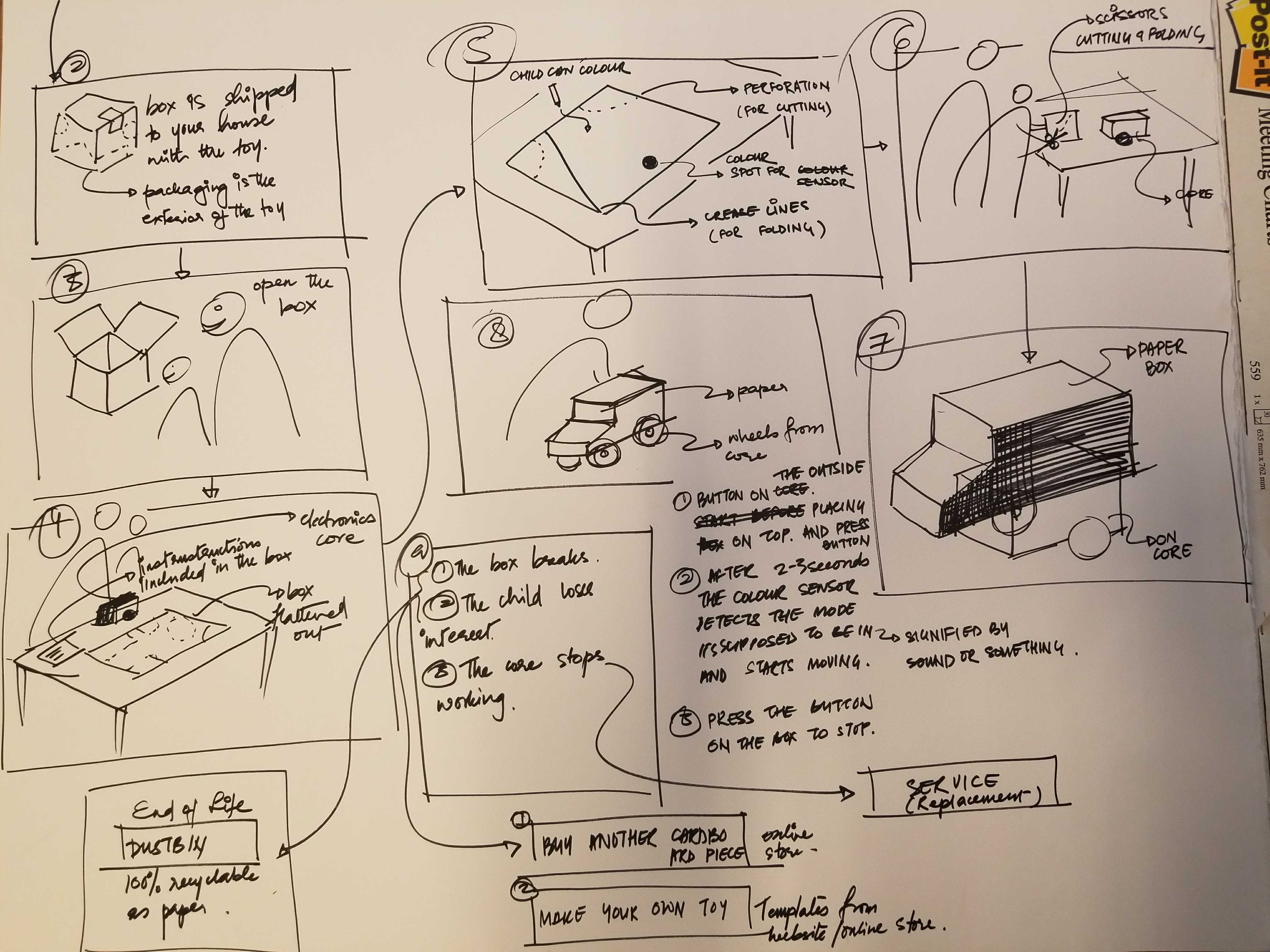 Thinking of the journey and interactions in sketch and video
3: Fleshing it out

We also considered how this would ultimately have a net positive impact throughout its lifetime. The cardboard is easily recyclable and the electronic module is kept the same throughout its lifetime. Therefore, in one lifetime it can take up the role of different toys with the same electronics. This way the life of electronic parts is enhanced and reduces the Amount of times the electronics have to be thrown out into landfills.  So even though the production phase for the product might eat up a few resources, during its lifetime it will make a positive impact overall. 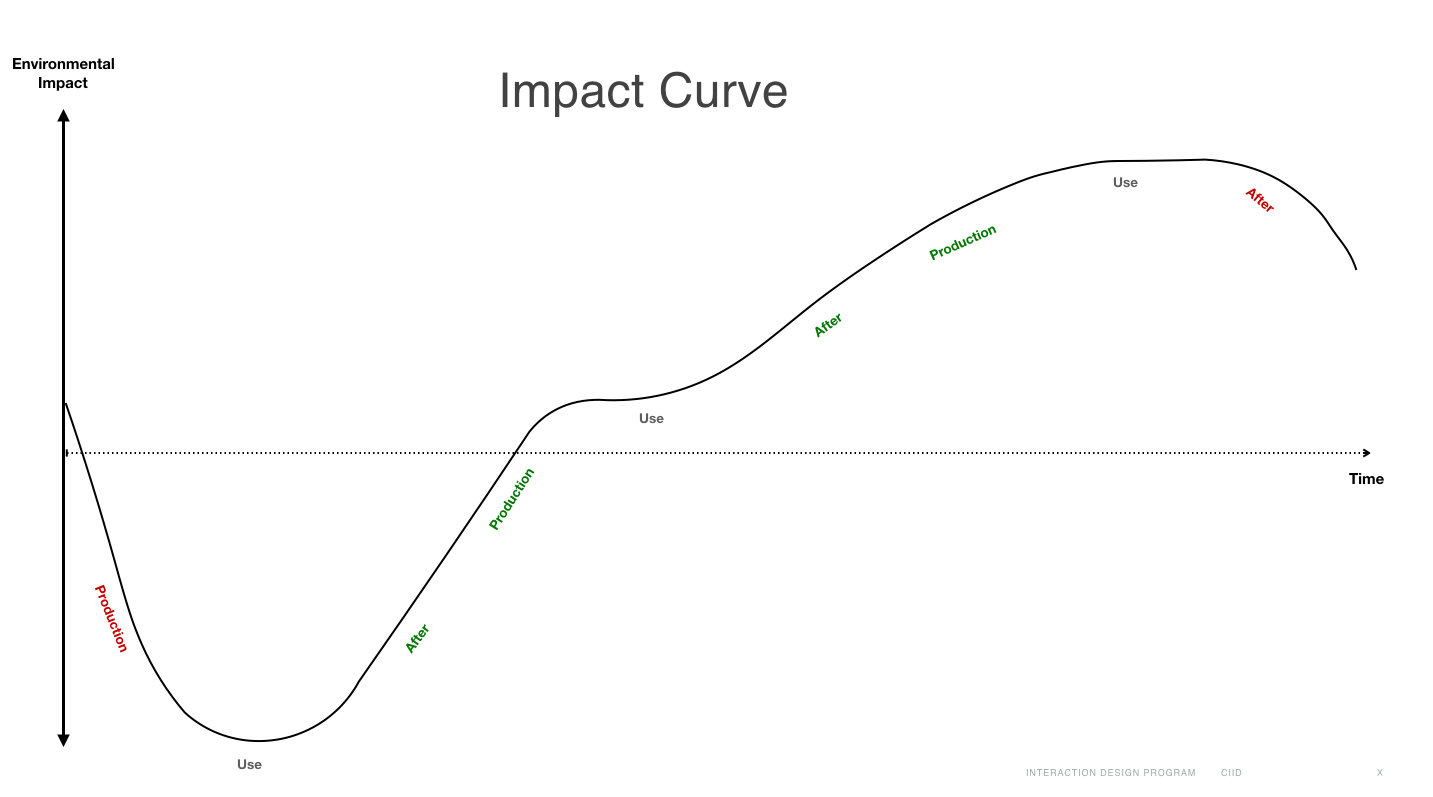 Furthermore, we also thought about the service map around the product that would help make it a reality, and see in more detail how it would be more sustainable during its use.

We fleshed out the Cardorama takeback program to see how the service would work during its use to refurbish and replace electronic parts. 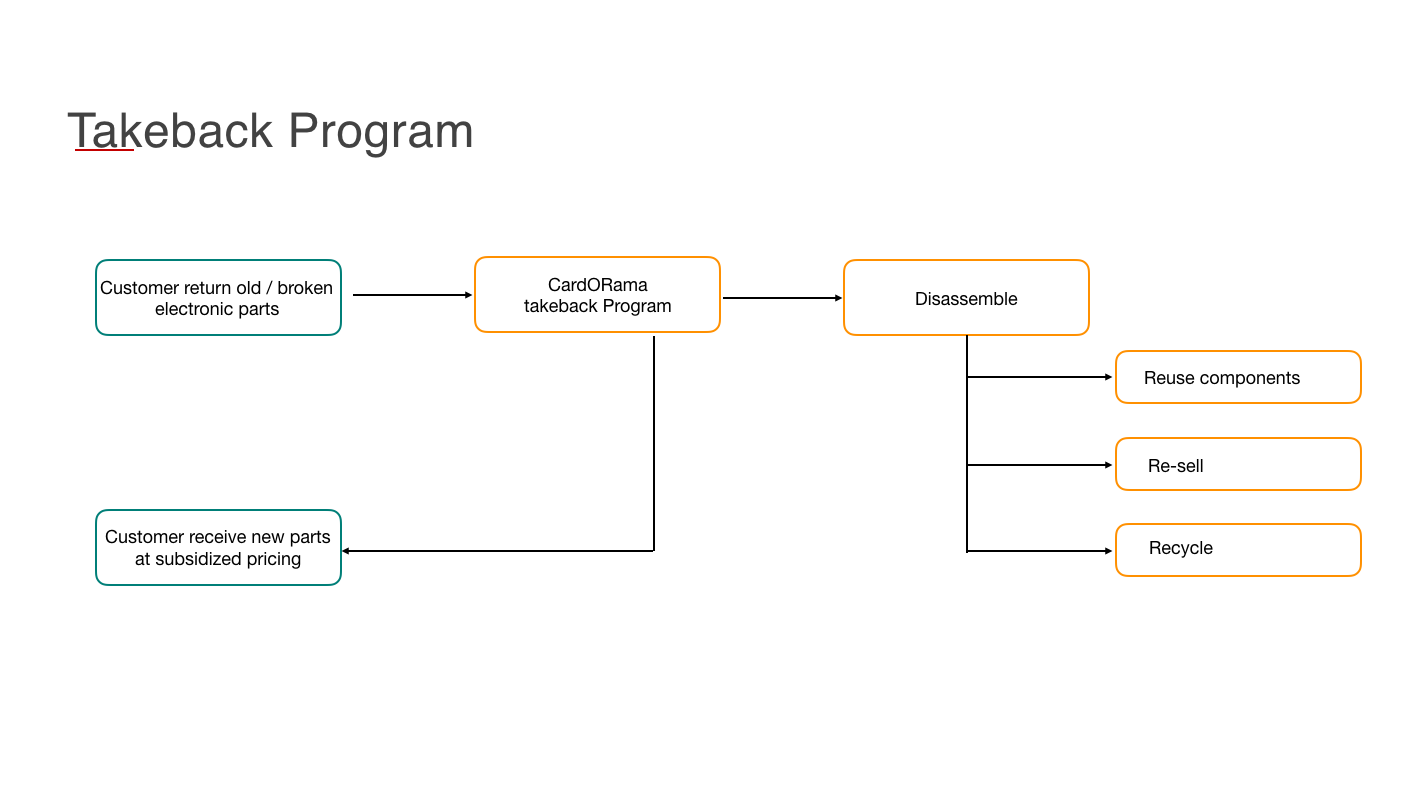 Fleshing out the takeback program to flesh out how the electronics would be reused and recycled during use
4: Building the prototype

The electronic core module contained an Arduino with two stacked shields for mp3 playback and DC motor control. There was a small speaker connected to an audio amplifier, a button for basic interactions, an LED strip, and a color sensor to detect colors from the cardboard pieces. There were also DC motors with wheels for it to move. 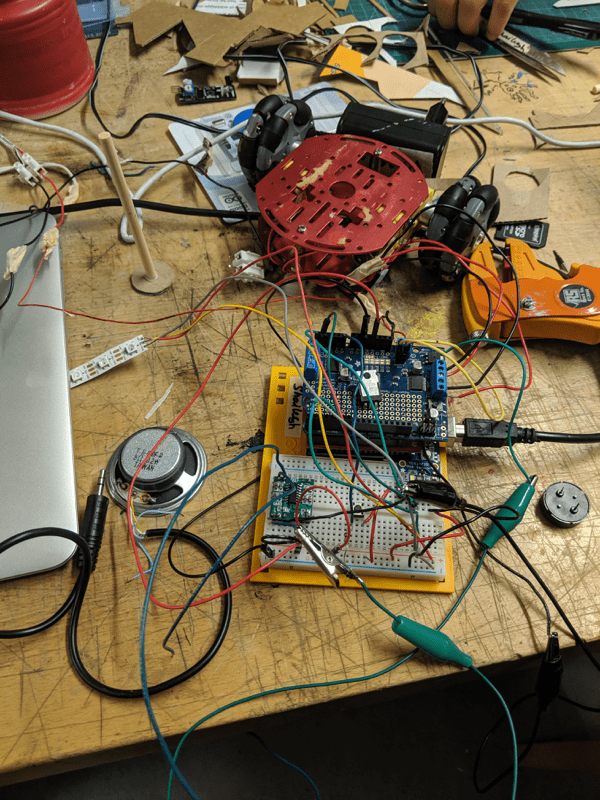 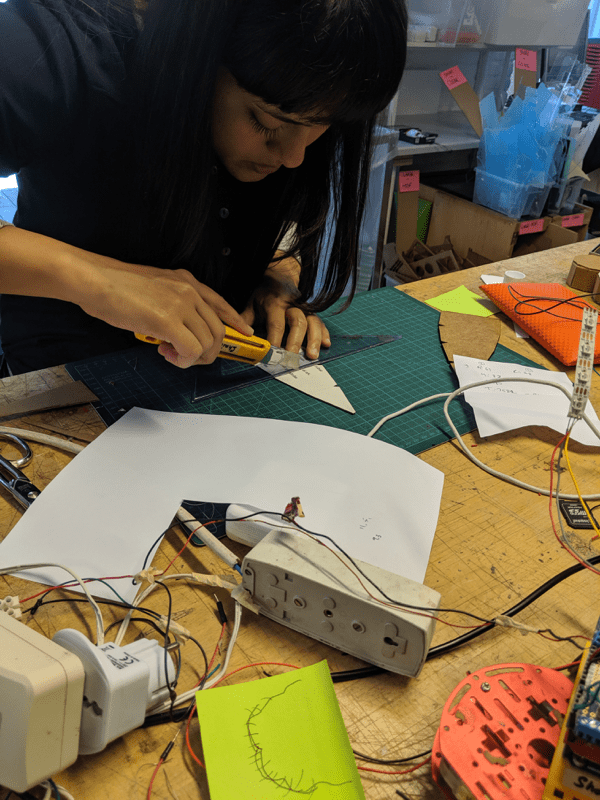 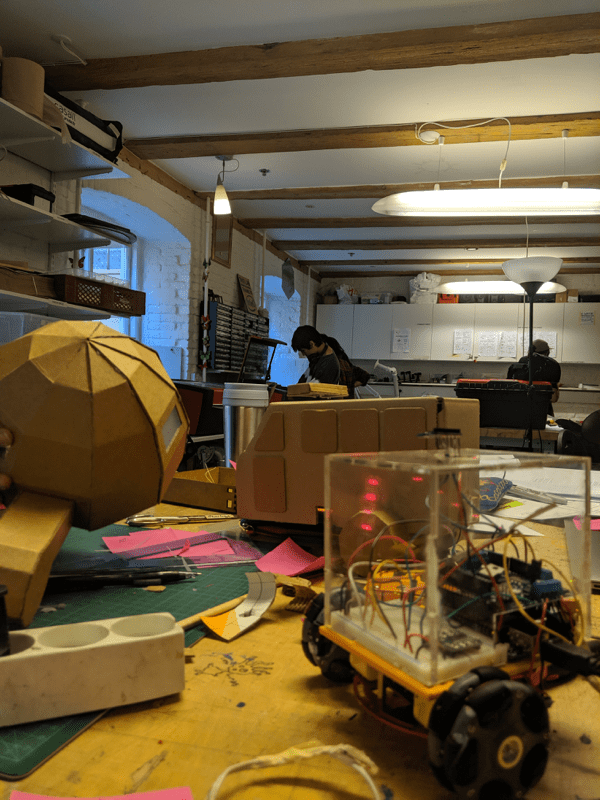 My teammate also built two cardboard toys for a car and turtle. Switching these toys over the electronic module changed how the module behaved. The wheel speed changed, the LED color changed, and the sound changed. We also built in more interactions like honking the car horn from the top.

The code for the prototype was written in C++ for Arduino. The code can be found on Github.